Brothers and sisters and how to not kill each other 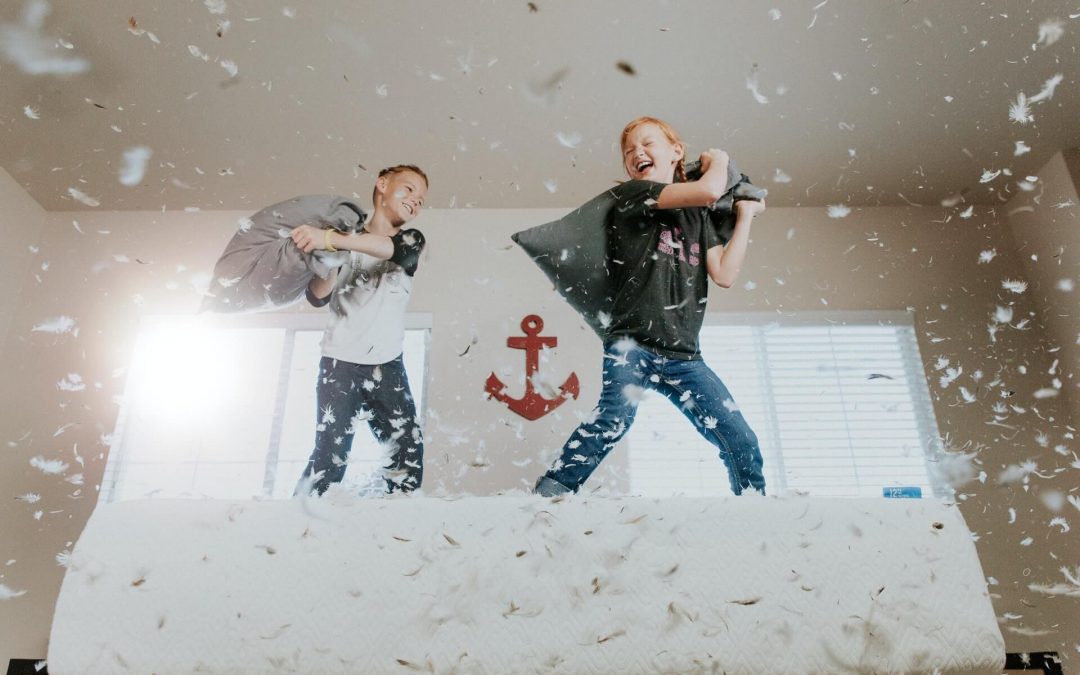 I believe most of you know what I’m talking about. As soon as you get more than one child in your family, you get this unavoidable question of how to teach your kids to co-exist close to each other without them harming each other physically as well as without you harming yourself mentally.

If you’re unlucky, this is what you get to hear:

He started it first, not me!

Why is Peter allowed to do this and me – not?!

Can you grab me with your hands as well? (when you’re breast-feeding your younger child)

He takes my toys away from me!

I don’t want to play with him, he’s too young !

You feel as if you’re being involved in a war between two states against your will, where each one is trying hard to make you their ally. Your energy level is being flushed straight into the sewers of never-ending fights and arguments. In the evenings, while you’re waiting for your husband to come back home, you’re trying to get rid of this tempting image of you putting your sleeping kids into a blue Ikea bag and taking them to the nearest orphanage as soon as the night comes.

So, keep your ears peeled — as a mother of multiple children, I’m about to share some of my secrets with you.

So, first of all, let’s remove ourselves from the war zone – you’re not a police officer anymore, whose job is to keep law and order on the assigned territory. No way — instead, you’re a Swiss lady who has seen enough things in her life, and your most powerful weapon is NEUTRALITY.

There’s only one computer (alternatively a ball, a piece of chocolate, mom) and 2 kids! That’s a tough one, what are we going to do?

When leaving the younger and older ones alone in the room you tell them: “Look after each other, I have to take a shower”

One of them is trying to get onto your knees while you’re breast-feeding the younger one: “You would also like to spend some time with your mom. You really feel like cuddling me when I’m cuddling your sister”. At that moment you ease the tension by supporting the older one’s feelings admitting their importance and the right to exist.

You’ve put the younger one to sleep and warned the older one, that now is the time to be quiet. Finally you make yourself comfortable in the kitchen with a cup of tea and an interesting book. In a couple of minutes you hear a noise coming from the corridor, it reminds you of a noise an elephant makes while walking, and then the younger one wakes up.

Great! This is the time when your older child gets to know what life is in the form of NATURAL CONSEQUENCES. You tell him: “Peter, looks like the noise you made woke Masha up. I’ll lead you to her room, so that you can calm her down — try reading a book to her or tell her a tale.”

This is a never ending practice. Don’t get ahead of yourself and don’t throw yourself into the breach. You still got your cup of tea waiting for you, right? So let’s get back to it, get some rest, refill our energy levels, letting the kids find their own way out of this situation, and, most importantly, let them build their relationship without you controlling them.

What is your actual direct responsibility which you’re not allowed to ignore? The child’s feelings. Regarding that, you are here for them, with your large ‘container’ for feelings. We have to remember, that all the emotions have the right to exist, but not all ACTIONS.

Looks like you got really angry at your sister Masha who stepped on your LEGO construction. It was such a strong feeling, that you felt like punching her. I see you’re really upset about it, but in our family people don’t beat each other up. Let’s tell Masha about how you face turned so red, that it started to look like the colour of the most spicy ketchup ever! Then let’s ask her to help you move your LEGO to the corner, where it will be safe.

In the Montessori kindergartens the youngest children use the red circle that tells you: “Stop! I don’t like it!” and a green one for “Thank you, let’s play together!” Something to implement into your home environment.

Finally, last but not least! You are also somebody’s brothers and sisters. In your head, apart from your own will, you will notice the behavioural patterns that you’ve acquired from your parents. Those are probably not the best ones. For example, you have been compared with your sister by your parents. What consequences does this have? By comparing the two children, a parent makes a friendship between the two impossible by the time they become adults, instead it inspires feelings of mutual envy and resentment. Don’t do it!

Instead, you can say:

“You are the closest people to each other, you are closer to each other than me and your dad. Same blood flows through your veins. Together you’re a tribe that will always protect and support each other, even when me and dad become old.”

Always connect them with each other. “Ask Max, he’ll definitely know. Ask Varya, she’ll help you. Today Eva will bring you back home from the kindergarten, help her with the backpack when you’ll be in the bus. I need to work, could you please put the stuff out of the washing machine? ”

Checked in practice. It is very much possible to live by the rule: “ Friends, brought up at home.”

Max, Varya, Eva and Theo can definitely confirm that.